Anything about guitars, the recording equipment, playing techniques and everything else…
Post Reply
101 posts

PAB wrote:I decided to start an hunger strike until somebody finds the solution.
Help, I am already hungry.

Where's Chris M. when you need him.
Tina

First, thank you Jim for your post, that's really funny... though absolutely understandable!!

Pab, I hope you're still alive as I haven't see you lately on here... I promise I try to find the solution but presently I cannot see your pictures! Where have you all gone...?

Tina, I'm glad the last post's been that useful to you

As for Blue Street; I've played it a few days ago so this is what I could discover to you (might be wrong some places as I did it at 6 AM): And, in each and every track he uses this:

Back to the Beatles... this particular guitar is most known as Paul McCartney's instrument.
The company Karl Hofner GmbH & Co. was founded in Germany in 1887. The worldwide reputation came in the 1920's after Karl's sons joined the business. The company changed owner several times in the 90's and today it's owned by a previous General Manager Klaus Scholler; while the instruments are distributed by the company CMI.
The company itself has one division manifacturing guitars and basses and another for string instruments.
Besides this bass, Hofner GmbH is famous of manifacturing kind of replicas. In fact these guitars aren't replicas but individual guitars VERY similar to a well known one. But this belongs to another topic with another Hofner...

So back to the famous bass. This is an electrically amplified (with two humbucker pickups) semi-acoustic bass guitar invented by Walter Hofner in 1955. Though it's usually called violin bass its body-shape was fashioned of a double bass. The instrument is very light and, according to artists, very easy to play but has a deep, warm and very rich tone as Hofners usually does. It brings back old-time tones and also ideal to play melodic bass lines on it and I think that's why CR loves using it so much. Besides the above mentioned Blue Street this is the bass guitar of Blue Guitars, too, of course; and I believe it appears on many others as this is the only bass CR owns. Probably don't have to wonder which bass has been played within the Hofner Blue Notes...

For those who likes to pick up its sound in the songs: kind of unfortunately the bass guitar is one of the instruments usually the lack of them can be heard. It might sound strange but actually a bass player told it to me. "You can't hear it when it's there but you can hear when it's not there." (I'm sure this is the point where Alan tears all of his hair out...

)
So as for me, thank my composer friend's long education, I can hear bass in 90% of songs and it took 3 years to me. But I'm sure many of you remember the great solos of Colin Hodgkinson from the last tour. But really, the best place to discover its sound would be the newest earbook, especially the instrumentals. (Playing Dirty New Town with treble on the minimum and bass on the max, for instance

)
If interested in bass guitars also worth to listen well to what the great Sylvin Marc does with his Rickenbacker on TRTHAB DVD...

Well, that's for now... hope you like it. Have a great day everybody,
Chris
You can waste a whole lifetime trying to be what you think that's expected of you
But you'll never be free.
Top

Oups, ghost pictures? No, I had deleted it from the web album. Sorry.

Hi Chris,
I take it that this guitar is that hugh guitar that Colin Hodgkinson plays?I know what you mean when you say its more noticable when its not there .
Chris... thankyou so much for the information on Blue Street.This will be a big help.Keep up the great work and I look forward to seeing what you have to say about that tiny guitar that PAB has posted pictures on.
Tina

Tina, this is the exact guitar Colin plays as on the albums and in concert as well.
On the travel guitar, Pab, thanks for the pictures... I'm in search... not easy.

By the way, I'll be offline until next week as leaving to the lake. I hope I'll return recovered and well tanned

I'm back again. Regarding the travel guitar I've searched all through the web to find it... actually I was at the point to give it up. To be honest I've never seen so much ugly guitars at one place.

But! Finally we've got it! Thanks Pab for the quest. 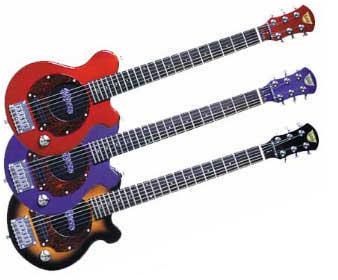 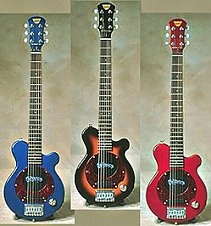 This guitar has a built-in-amp and that's why it's ideal for traveling/outside playing. Also, a humbucking pickup serves a tone similar to the Maranello's and so it's ideal to CR. You can adjust volume with a knob determining the guitar's name: 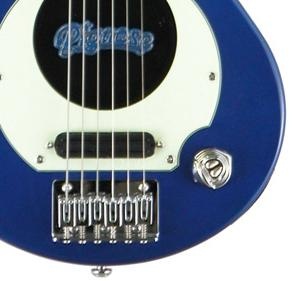 The funny thing it's definetely cheap so if you want a guitar CR plays too, don't bother yourself with stupid things like a Fender...

As previously written, Hofner GmbH is also a manufacturer of cheap replica guitars. In fact those guitars aren't real replicas but individuals similar to an already existing brand guitar; in look and in sound as well.
Though this is like a Ferrari and a VW... both of them have engines and four wheels and we call them both a car but they're definetely not the same and not even close.
The sound of Hofners are rough, buzzy and not that clear, but they're pretty cheap that's why ideal for beginners. To be honest if you have ever listened to a high-school-band's performance in the gym hall Friday night, you know it doesn't make any difference. Those guys don't have to buy a Fender or even a Squier because when the mixing is poor (all instruments on the same level) and everything's echoing there's not much difference between a cheap and an expensive guitar.
You might remember how much Hofner kind of replicas existing if you look back to the latest tour's set decoration... all those Stratocaster, Telecaster, Gretsch and Gibson lookalikes were Hofners.
This particular one is of a Telecaster-style; closer to the Thinline model in construction. Remember, the Thinline works with a pair of humbuckers; this Hofner has three of them so its sound comes from somewhere deep if you know what I mean. Like a V8 engine.
This model is a real vintage and its manifacturing has been stopped long ago, I wonder how CR took hands on it.

Anyway, he used it on Blue Guitars, too, but mainly on the latest earbook. Actually this is the guitar appears on the cover; besides the 'Hofner-Stratocaster' in Robert's hand and the Violin-bass in Colin's:

Well, I've put a lot of pictures in this post so here's another I'd missed in my Violin Bass post:

Do you notice CR's art studio is pretty messy??

Sooo... the fact is no guitars are left. I do hope you enjoyed this all as I did so very much.
I might be able to figure out some other things regarding Chris Rea's guitars and post them here... or I might be not. Who knows?
Thanks again for your support; it's been a great time and so much fun.
Chris
You can waste a whole lifetime trying to be what you think that's expected of you
But you'll never be free.
Top

Fantastic pic of CR in the studio (With McCartney's bass) , thanks Chris
Top

Hi Chris,
Thankyou so much for these excellent posts and what a pity it has to come to an end but thats how the saying goes.
Tell me does this Pignose PGG 100 (what a name to give a guitar) does Chris play this on any of his albums or does he just use it on the Stony Road DVD.I hope you find more to post here about Chris's guitars.
Tina

One word Chris: congratulations.
Thank you for your knowledge, the pictures, everything.
But there are always something to tell about music and guitars.
We'll be back.
Thank you again.
PAb


Tina3 wrote:Tell me does this Pignose PGG 100 (what a name to give a guitar) does Chris play this on any of his albums or does he just use it on the Stony Road DVD.

I guess, only guess he didn't use it on any albums since it doesn't make too much sense to me. You know, as travel guitars usually, it's ideal to take it with you when you're fancy rehearsing outside on a sunny day but I can't imagine nothing in its sound that can't be done with another guitar. OK there's the built-in-amp which is always funny and unique and Chris used a built-in-amp guitar definitely for its sound; that was Chicago Blues and the Italia Monza. So I think it's simply his travel guitar.

And yes, Pignose... erhm... you know, that knob... I'm seriously thinking of starting my own guitar brand under a name of Hippo-ear... imagine what a fancy shape for a knob!!

alan1958 wrote:Fantastic pic of CR in the studio (With McCartney's bass) , thanks Chris

You're very welcome Alan. There's another with CR and his Hofner shorty once I posted on the forum. Here it is just for you:

PAB wrote: But there are always something to tell about music and guitars.
We'll be back.

Thank you Pab and be it so!


alan1958 wrote:Fantastic pic of CR in the studio (With McCartney's bass) , thanks Chris

You're very welcome Alan. There's another with CR and his Hofner shorty once I posted on the forum. Here it is just for you:

Thanks again Chris ,another great pic, standing in front of possibly the most iconic painting he has done

Thank you so much Chris!

I thoroughly enjoyed this thread......

It was definitely a learning experience for me.

Thanks to Pab too,

Maybe now someone would like to start a thread on Chris Rea Paintings.... ?

(I always wanted to know how he does the craquelure effect on his paintings!)

lilybee wrote:Maybe now someone would like to start a thread on Chris Rea Paintings.... ?

I agree with Lily.This would make for an excellent new topic.
Tina

I thoroughly enjoyed this thread......

It was definitely a learning experience for me.

Thanks to Pab too,

Maybe now someone would like to start a thread on Chris Rea Paintings.... ?

(I always wanted to know how he does the craquelure effect on his paintings!)

Lily you're most welcome as well and I'm very happy you enjoyed.

Craquelure effects are usually made by a two-component thing called cracking varnish which is quite difficult to use correctly. First you have to use one component on the already dry painting then let it dry perfectly (12-48 hours). Then you can use the second component on the same surface and let it dry, too (minimum of 72 hours); and while it's drying it cracks the original oil-painting surface. Then you can fill the crackings with another colour.
But as far as I can guess (only guess) CR mixes techniques to get to 'his' craquelure effect I'm sure he uses solvents, too, on the dry image to change the original look... anyway it's not easy to reproduce.

Users browsing this forum: No registered users and 0 guests