I'm actually starting this for Tina's idea but apart I think there are some 'guitardos' here, too (is this word existing?

) so I try to list the guitars CR plays and give you an idea how do they sound.

Please note Chris' guitars are all a bit customised so there could be differences in the pictures I put in here.

This is simply an icon. The Strat is one of the most popular guitars ever.
You can bring many different type of sounds out of a Strat thanking the three single-coils pickups and the 5-way pickup-selector. This feature can combine the outputs, for instance position 2 activates bridge and middle pickups.
The first (neck) pickup produces softer, mellow sounds; the middle makes richer, ringing notes while the third (bridge) one is the pickup of a rougher tone because of the nearness of strings' end.
Neck and middle pickups have tone adjustment knobs as well to increase/decrease their tonal strength. Bridge pickup has no adjustment knob; the third knob is for the volume.
Stratocasters have at all rich, sonorous (and beautiful) sound and let the artist play a wide range of tones.

CR uses the American Standard series with tremolo arm removed. He has two vintage Strats called Bluey and Pinky; he plays them from the beginning of his career.
You can hear a mellow-tone Strat playing in the Farewell-version of Julia while Stainsby Girls offers a richer, rocky tone. Bridge pickup works in Square Peg, Round Hole.
You can see Chris using the selector in Let's Dance on The Road to Hell and Back DVD: by the end of the song after that long melody-solo he strikes down with the edge of his hand. Can you hear the difference?

That's for one breath, hope you like it. I'll continue with Telecaster Thinline.

Also, can you put pix to the others too?

Lily I've corrected my mistake, thank you (and sorry). There will be pictures for each guitar.
So here it goes:

This is a very special guitar originally coming from 1968. It has a vintage-style hardtail Stratocaster bridge, a 3-way selector, a reshaped pickguard and a significant f-hole on the body.
Despite standard Telecaster it has a pair of Fender Wide Range Humbucker pickups instead of single-coils ones.
A humbucker includes two coils with opposite polarities making a much warmer, fatter tone. Actually it's like the sound is coming out of a huge, deep guitar body.
With the selector you can control the neck and bridge pickups plus there's a volume and a tone knob. At all it's working very similar to the standard Tele.

Despite it's a Fender it sounds like more of a Gibson (most known is Angus Young's SG).
Chris uses this guitar in 'Til The Morning and the first part of Heartbeat with the selector in p1 (neck pickup) so it sounds a bit softer but actually fat enough. Sooo wonderful...
I can also recognise Thinline tone in several other Celtic & Irish Blues tracks. Explore!

by lilybee
Thank you Chris!!

I see them now, they're beautimus!

This will be a great reference page!

I'm so impressed by your knowledge, not only on guitars,
but on every little detail about Chris Rea's playing style !!!

By the way, did I tell you my Strat is upside down?!

Yup, it was a lefty that my husband "converted" to righty by changing the strings,

(I'll show you a picture, if you like) It's got a great sound, and can take a lot of beating
from someone like me, who is still learning.

On your Strat, in my opinion an upside-down Strat is still a Strat! Or should I say one Strat in the hand worth two in the bush

Anyway I'm curious to see it!

Did I tell you before our tastes matched a lot?? The Acoustasonic is one of the most beautiful children Fender ever made (and it's BLUE!).
So when I buy it along with a Stratacoustic (http://www.fender.com/products//search. ... 0967400306) I gladly lend it to you!
(As soon as I rob a bank or so

by Tina3
Chris,
What can I say apart from a huge "thankyou" This makes fasinating reading for me and I can pick up the different sounds as I listen to the different songs. The Stratocaster I can follow no problems. I will need to listen to the sound of the Fender '72 Thinline a lot more so I can reconize it.
I look forward to your next post and thanks again.
Tina

On your Strat, in my opinion an upside-down Strat is still a Strat! Or should I say one Strat in the hand worth two in the bush

Anyway I'm curious to see it!

Did I tell you before our tastes matched a lot?? The Acoustasonic is one of the most beautiful children Fender ever made (and it's BLUE!).
So when I buy it along with a Stratacoustic (http://www.fender.com/products//search. ... 0967400306) I gladly lend it to you!
(As soon as I rob a bank or so

We have champagne taste with beer pockets!!!

.
Tina, you're very welcome, and here's the newest: 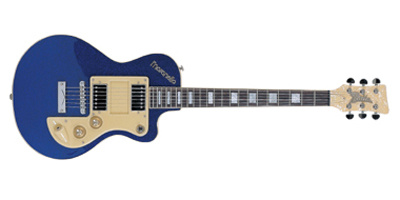 So do you think CR's been playing his Maranellos for decades? Then you're wrong

. Actually he started to think about a different kind of tone when he decided to make Stony Road.
So he went to Denmark Street and bought the sparkly blue Maranello. After he tried it he got so fascinated about the sound he went back and bought another three.
Thus CR owns four Maranello Classics at all and none vintage; all of them were new when he bought 'em. You can read the story here: http://www.italiaguitars.com/ (second article under 'Review').

The construction of the Maranello could be familiar; it has a pair of Wilkinson WVC Humbucker pickup (neck and bridge), a volume and a tone knob and a 3-way selector switch. Italia Floating Pickguard and the Tune-o-matic bridge are its characteristic features.
Thank all of this the Maranello has a very unique sound. No wonder CR chose this one when the blues got heavier in him, since for me it always sounds like a vinyl record. A very clean vinyl record but a vinyl record

.
Because of the humbuckers its tone is warmer and heavier; not that bright as a Strat, and not that 'noisy' either, you know, no buzz in the background caused by single-coils.
As far as I noticed Chris uses a fine combination of reverb and delay effects to get to that 'oldie' tone which is ideal for great slide-solos in '60s style.
At all, Maranello's sound goes deep down to your stomach and resonates your whole body.

. Joking apart, the Maranello has a main role on BG; it appears in at least 70% of the songs.

Hope you still enjoy, I do. Next: I don't know yet but it'll be interesting.

by Tina3
I love the sound from these Maranellos guitars. The sound from the red one Chris plays on Road To Hell on the live DVD is just amazing. Chris these posts are very interesting, I wonder what the next one will be?

by Jim M
Alan
I don't know anything about the price of guitars but they don't seem to that expensive -considering they appear to be a fine instument ?
Jim

by Tina3
I was thinking the same thing last night. If you compare the price of one of these guitars to a Stratocaster for example they are cheap. I was wondering are they only a guitar that has not been around long unlike the Strat which has been round since the 1930's or so.
Tina

Jim M wrote:Alan
I don't know anything about the price of guitars but they don't seem to that expensive -considering they appear to be a fine instument ?
Jim

Tina3 wrote:I was thinking the same thing last night. If you compare the price of one of these guitars to a Stratocaster for example they are cheap. I was wondering are they only a guitar that has not been around long unlike the Strat which has been round since the 1930's or so.
Tina

Alan your so funny

Can you play the guitar or do you just like to look at them?
Tina

Tina, actually the Strat's been around since 1954 so Gibson guitars are older.

Well, since I didn't know this guitar that much until now I've read several reviews; some of them very negative while others positive.
The guitar itself is the Italia version for Stratocasters, with three single-coils pickups and a five-way switch but only one volume and one tone knob. Differently from Strats the pickups aren't that noisy though they don't produce so rich sound. Apart from it there's nothing particular in the Monza's sound.
At all the Monza is a very playable guitar with a fine retro-look; sounds like newer Strats.
The body itself is very extremely designed; with a strange-looking pickguard and a special feature. The thing you can see in the lower left corner... is an amp. An individual, clip-on practice-amp with tone and volume knobs. Reviews says it sounds like an old AM radio and I think that's why Chris uses it at all.
He probably used this guitar to get to those grinding tones on Blue Guitars (Country, Chicago, New Orleans). And without the tremolo-arm, again.

By the way Ben Waugh from The Sillies plays this guitar, so if you're curious you can listen to its sound here:
http://www.amazon.com/Americas-Most-Wan ... 60&sr=1-20

Oooh, this is a speciality!! Actually it's not a sitar (traditional South Asian instrument) but an electric guitar that mimics its sound. In addition to six playing strings there are 13 sympathetic strings with own pickup.
Both sympathetic and playing strings have lipstick pickups (electronics fully encased in a metal tube).
The electric sitar has a unique bridge called 'buzz bridge', making each and every note distinctively buzzy and tremolous.
Lot of musicians enjoy using it including Santana and Steve Vai, I think CR plays this on The Beginnings album.
Despite the look it's quite easy to play when you can play guitar.
You can listen to a very talented young musician playing this instrument over here: (Give a try, it's amazing.)
http://www.youtube.com/watch?v=dIfHUlGO0u4

Unfortunately Italia discontinued the manifacturing of this type. (Jerry Jones still does it!!)

Well, no more Italias in CR's inventory so next time we'll go for folk music...

(Mentioning Santana I'll go to see him tomorrow in concert