How about ordering it from the UK? Is that not a possibility?
What a bummer...
You're never to old to dance!
Top

How about ordering it from the UK? Is that not a possibility?

of course, this would be possible. But to be honest I am still not that convinced of this re-issue to spend more money than usual.
If it was a lot of new stuff I would seriously consider buying from a UK shop but for just a few songs...

At least we will get a german release - people from France or Italy will have no other choice than to buy the expensive import version...

Does anyone know why there is such a massive delay?
Top

Personally I think it's worth it. Listened to the old CD again and with the new music and movie I have seen and the book, I would go for it.
Buying from UK costs 45 Euro. What is the German price? I guess about the same...
You're never to old to dance!
Top

There is a whole lot of countries that does not get their version of the release, only choice is to order it from UK. But why there should be any matter from where people order it, don´t think there is any difference between releases in different countries?

And price should be pretty close no matter where you order it??

I´m still waiting my order too as there is no rush for me either.

tobi777 wrote:of course, this would be possible. But to be honest I am still not that convinced of this re-issue to spend more money than usual.
If it was a lot of new stuff I would seriously consider buying from a UK shop but for just a few songs...

At least we will get a german release - people from France or Italy will have no other choice than to buy the expensive import version...

Does anyone know why there is such a massive delay?

Maybe they do a small release, like you have with the other books. just CD's.
I have a one CD version of the Return of the Hofner Blue Notes, and the book...
Otherwise I really don't get that countries will differ much in price.
Netherlands still hasn't a release of the new Le Passione as far as I know.
You're never to old to dance!
Top

First post, so I suppose some background is in order! I first got into Chris's music in 1989 with Road to Hell, fell in love with the superb guitar work, remained a fan through the early 90s, eventually seeing him live in 1993 on the great banana skin tour, after that.... my interest waned some what.

That was until I stumbled across Blue Guitars. I was blown away, an amazing set, and a pleasure to dive in and out of over the course of a year... encouraged me to see the man on tour again in 2006.

I've remained a fan, although its been the law of diminishing returns ever since, Return of the Hofner Blue Notes was ok, one cd of rather good blues, one not so good, and a cd of instrumental shadows-esqe music. This brings me onto my point. It was the same with Santo spirito, one cd of decent blues, and 2 cds of instrumental music. And now we have La Passione, which I bought last week.Musically what have we? 1 cd with 34mins of decent music, and another cd filled with orchestral film score music. My question is what do you do with these discs? How many times do you listen to the bull fighting soundtrack? La Passione is therefore an expensive disappointment.

Yes, its beautifully presented, and yes the music is good, but as a package, its poor value, esp when compared to Blue Guitars. It would have been better with one cd of music, mixing both instrumental and sung tracks, I find it a frustrating listen.

Don't get me wrong, I admire Rea's work, and there is quality here, but for £29.99uk I would argue this is a poor deal
Top

Hi All
Being in Canada I had no choice but to order from the UK & it arrived a week or so ago.
The 2 CD's are very similar to the original (some songs changed slightly some a little more) & of course the added instrumental songs. I for one really like his "soundtrack" instrumentals (both La Passione & Santo Spirito /bull fighting -I did not like the 3rd disc) and they have become among our favorite "dinner music". Yes they are completely different than his usual style but are very good in a different way. I find it amazing that a blues guitar player can write & arrange such beautiful orchestral music !
I also enjoyed the DVD's and seeing the movie more in the format he wanted and seeing all those GREAT cars !
I also enjoyed his comments on the movie & hearing his insight.
I found the pkg. to be well worth it !
Hi Jaded
Have you heard Dancing Down the Stony Road -FANTASTIC ?
Jim
Nothings Happening By The Sea
Top 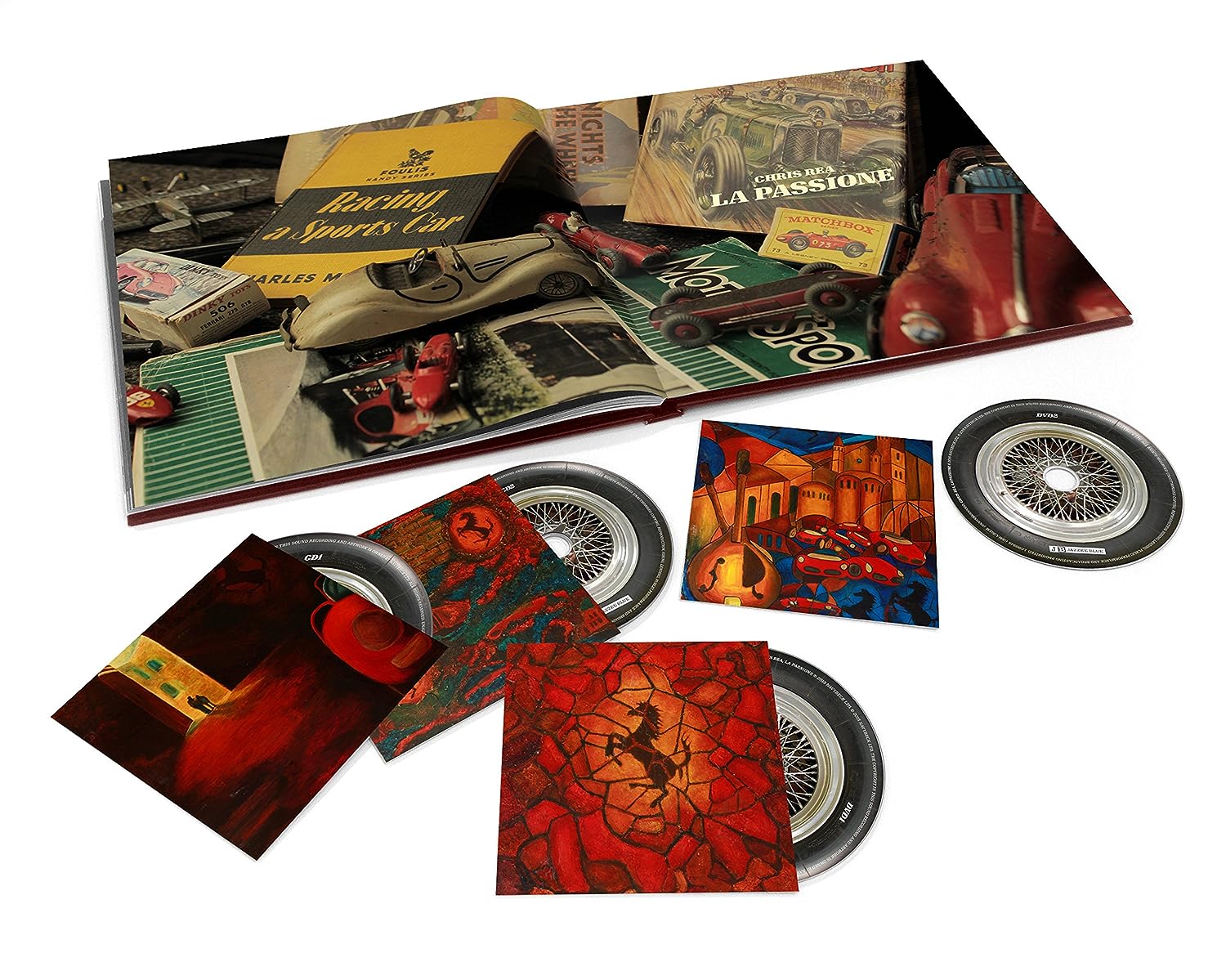 The package looks like a "hybrid" of Blue Guitars / Hofner Bluenotes earbooks and orginal La Passione.

I have to wait until some good offline store brings the new release for general sale as it is absurdly expensive to order it from Amazon UK to be delivered to Russia. So that I try to get enough of pictures and reviews and try my best to keep patience!

It's quite absurd that Germany Amazon let it come out in February 2016.
If you order through UK, it comes from Germany...and with sending costs it's the same price.
The logic is weird.
The Earbook or Coffeebook is excellent. Only difference there is only the Jazzee Blue label on it. No other.
And it is really wonderful, really worth the waiting, but still why there is a later time for release in Germany really is crazy.